Using Primary sources helps students to understand that history is fluid and multi-faceted.  Primary sources can help students recognize the varied and nuanced motivations and actions of those who lived in the past. Prior to the Field Seminar all participants will select a primary document (exp... Joseph Plumb Marting) representing that of our Founding Generation and the principles they espoused.  Identify a way to honor them while on site during the field seminar. Submit a copy/photo/ analysis of your project below on or before May 30th 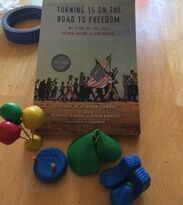 ​I made a birthday package for Lynda Blackmon Lowery, who was the youngest person to make the march from Selma to Montgomery in 1965. I read her memoir “Turning 15 on the Road to Freedom” about the march, and she had her 15 birthday on the second day of the trip.I was so impressed with the tenacity that Lynda showed, making this march not long after have gotten stitches over her eye and on the back of her head from being beaten with a billy club in another peaceful demonstration in Selma.
Her package includes some things I thought would help her on the march, as well as a birthday treat.  It was raining for most of the trip, and pictures from the book showed the mud that they were walking through, so I thought she could use some blue rainboots and an umbrella. They had only two tents, one for the men and one for the women, so I also thought she may like a tent of her own. I also made her a cake that said “Happy Birthday Lynda” and had some candles. Finally, I made some balloons. I didn’t make her any food, because she was well supplied with sandwiches, candy and cookies by her father and grandmother before she left on the trip. I made all the items out of clay, so I could package them in a box to leave at the Selma bridge when we visit. 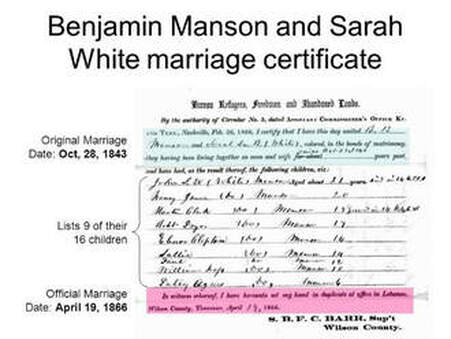 ​It’s not “just a piece of paper.”  To tens of thousands of former slaves, a marriage certificate was a symbol of freedom.
Benjamin Berry Manson and Sara Ann Benton White, received their marriage certificate from the Freedmen’s Bureau, on April 19, 1866.  For the Mansons, the certificate issued was more than a document “legally” sealing the sacred bonds of holy matrimony.  Instead, it was the long-awaited hope that they and their 16 children would live free together

Please submit your completed work below on or before May 30th